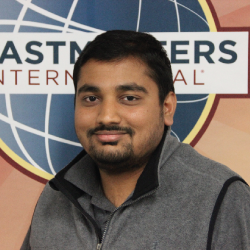 From Computer to Communicator

From a computer science engineer from the city of Coimbatore, Tamil Nadu in India to District 101’s Area C5 Director, Sriraj Vaidyanathan has come a long way – well, literally 8874 miles. When asked about his Toastmasters career, Sriraj’s eyes light up like a kid in a candy store! No wonder he is our 2016-17 District 101 Toastmaster of the Year!!

Sriraj met the current love of his life, Toastmasters, at his company, Computer Sciences Corporation (CSC) in Chennai, Tamil Nadu. Sriraj’s friend had casually invited him to a CSC meeting in April 2011 and within the first few minutes, Sriraj was already in heaven. After traveling and working in various countries, Sriraj landed in San Jose in January 2014 and found a new home club, Hot Buttered Toastmasters.

Sriraj served as the District 101 Conference Chair last Fall (in conjunction with serving as an Area Director), a role he says is similar to what a program manager does in a company. Listing out things to be done and tracking if they were completed were some of the chief tasks he had to do as the Conference chair. He admits he had no clue what he was doing when he first took on the role. But he felt lucky to have experienced team members who were familiar with registration formalities, printing promotional fliers, running the opportunity drawing, etc.

The biggest challenge Sriraj faced as the Conference chair was learning all the details that go into preparing for the Conference. Seeking experienced members helped him gain that knowledge. He also learned how to better motivate people to take on responsibilities for the missing roles.

Sriraj did miss a few things along the way and had to scramble at the last minute to complete tasks. He also felt he missed aspects of managing between less experienced team members and ensuring best practices for running a Conference were followed. Because of this, Sriraj stepped up again as the Spring 2017 Conference Chair to challenge himself to do a better job.

As a speaker, Sriraj’s biggest challenge is adapting to the audience, especially making them laugh during humorous speeches. Sriraj credits Kurt Sims from his home club as a great inspiration to him. Whenever he delivers a speech, Sriraj makes it a point to note Kurt’s reactions in order to gauge if his speech is good or needs improvement. He is thankful for all the feedback he has received, whether constructive or not since they have catapulted him to where he is now in his Toastmasters journey. The feedback has opened up new ideas and improvisations for him.

Outside of Toastmasters, Sriraj loves reading Harry Potter books (if he does read at all). He prefers watching movies and listening to music and was even trained in South Indian classical music for 7 years.

Sriraj plans to continue challenging himself in the future by participating in more contests and taking on another District Leader role. As our Spring 2017 Conference Chair, Sriraj already demonstrates that he is not afraid to step right back up to try things again. When asked to name one quality all Toastmasters should have, he doesn’t hesitate to say, “Willingness to fail”.